We started with coffee, pastries and some fruit while we exchanged hugs and goodbyes.

The visitor and vehicle permits we obtained at the start of our journey must be turned in and cancelled. The nearest location where that is possible is in Mexicali. So, we crossed the border back into Baja California, Mexico where the offices are.

The layout of the area where we must maneuver our vehicles was designed for cars and pickup trucks. Some of us have much larger vehicles which makes the process much more challenging.

But all of the drivers of the big RVs have become much more skilled at getting their rigs into and out of tight spaces. Everyone was able to return their permits and check out. A simple stop at U.S. Customs and we officially ended our journey.

One of the things that stand out in Mexico is the great class disparity between the extremely rich and the grinding poverty of many. There is a growing middle class but it is still small.

The good people of our tour made contributions to improve conditions there.

One area where anyone can help is with the Tarahumara Children's Hospital Fund in Batopilas. By clicking on their name you can generate a contribution that costs you nothing but has great value to these children.

This was an extraordinary trip. Both the people who traveled with us and the experiences were far above average. Thanks to all of you for making this trip so much fun.

Posted by Caravan Member No comments:


This day has come all too soon. This day is not only about the Caravan coming to a close, but reflecting on what we have all seen & done. The train ride through the Copper Canyon was spectacular, with one spectacular view after another. 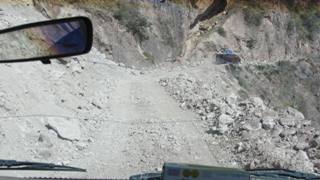 The van ride to Batopilas at the bottom of the canyon was at times breath taking and scary. We are glad to have seen Batopilas before the road is improved and an influx of tourists change this quaint little town. Putting 10 people in the back of an eight passenger “Spider” in Mazatlan was the Caravan going native. 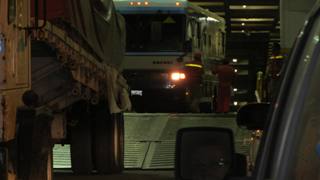 We will never forget the Baja Ferry. Watching as the Mexicans un-loaded the California Star was amazing. Watching them load the ferry was just as amazing. Watching Felix back his #5 rig on to the ferry will be forever etched in my mind.
We traveled the length & breadth of the Baja. There have been some great sites on the Baja, starting with the #1 hi-way. Will we ever again say the roads back home are narrow? 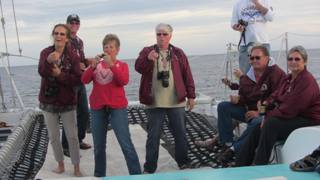 I do not think anyone complained when our Sunset Cruise in Cabo became a Whale watching show. 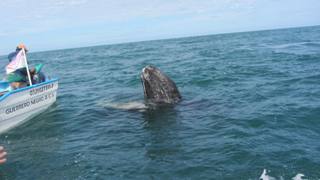 It will be a long time before the Whale watching at Guerrero Negro will be surpassed. All too soon it is over. So many unforgettable sights, so many friendships forged. 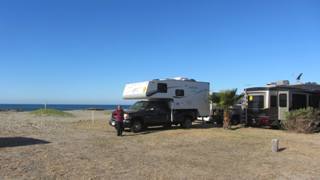 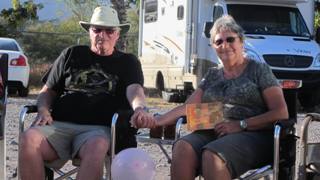 Now on to the finish.In the morning we are greeted with fog. Everyone is anxious to be underway. When the Wagonmaster leaves at 7:30 A.M., the rest of the Caravan follows shortly thereafter. The fog burns off as soon as we leave Ensenada & the drive is pretty nice as we all group up & top off our fuel at the last easy access Pemex before Tecate. 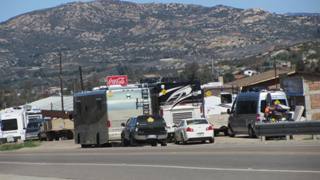 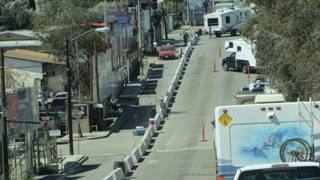 Following the twist & turns through Tecate, we are soon at the U.S. Customs. Some Caravaners lost steaks, chicken, pork & a variety of produce. It seems  if the package was open or the food was in a bag without the original packaging information, the Customs Officials took it. The roads in California are wider & no drop off. Everyone is in the Rio Bend RV Resort & Golf Ranch at El Centro by 3:00 P.M. The heat we were missing in Mexico was at Rio Bend at 100 degrees. There is a Travel Meeting where the Wagonmaster explains what we are going to do tomorrow at the Mexican border when we turn in our Holograms, followed by a happy hour. Thirteen Caravaners drive into the El Centro Applebee’s for supper. This day was a Free Day.  By 11:00 am, the campground was empty.  Everybody had left to spend the rest of their Pesos.  There is always a new Mexican dish or a planter to finally pick up before crossing the border. Oh yes, our Adventurers found the fish market too. Shrimp was reasonably priced and a popular purchase.


By 4:00 pm, everybody was back and ready for the 4:30 pm travel briefing. We went through the log, line by line.  Ken explained the best route to get through Ensenada, how to get through Tecate, and what we might expect when we go through the border crossing. 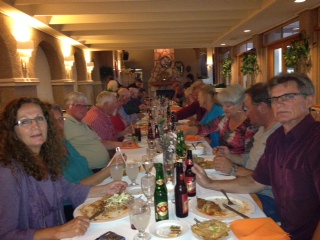 After the meeting, everybody got ready and went over to the restaurant for the 6:00 pm farewell dinner. 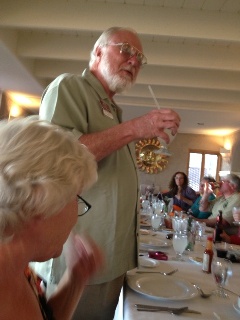 It was another excellent meal including dessert.  After the meal, Ken gave an appreciation speech commenting on our flexibility and easy-goingness.  Before we retired for the evening, each one of us stood up and talked about our most memorable times and the funniest. Carole and Ken (Adventure Caravans) had gifts for each rig.  A framed picture of the whole group, small Mexican dish, vanilla, metal whale designed and made by a local craftsman, and a fridge magnet from the Copper Canyon.  Wow!  We were not expecting that.  Safe travels on your next Adventures everyone!  Everyday has been an Adventure!


Posted by Unknown No comments:


We boarded a bus at 9:00am with our guide, Larissa, and our bus driver, Martine, for our trip to La Bufadora and a city tour of Ensenada. Larissa explained that Ensenada means “bay surrounded by mountains” and that fishing, farming, and tourism are the three largest industries. We saw round fishing nets in the lagoon that looked small but are actually about 500 feet. One of the main catches is tuna, which is mainly sold to Japan for sushi. 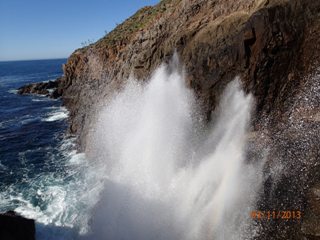 Our first stop was La Bufadora. After disembarking the bus, we walked down through several streets of shops and restaurants which were closed. 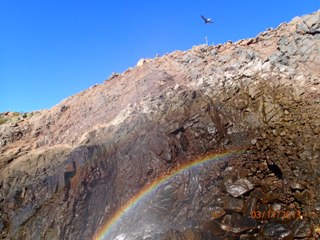 As we got closer, we heard a loud bellowing sound, and then saw the water blasting high up the cliff before receding and leaving a momentary rainbow. This phenomenon only occurs in two other places, Hawaii and Australia.  It is caused by air being forced into a cave by waves and then it is released when the water recedes. The height and sound is based on the level of the tide, sometimes blasting 80 feet high. We watched this happen over and over again. 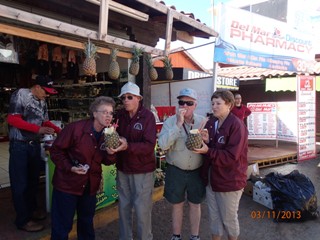 On our way back to the bus, some of the shops had opened. Several people stopped to enjoy pina coladas served in pineapples, churros (crispy cinnamon treats), and grilled clams. There was a lot of shopping to be done, but very little time. The vendors were very willing to negotiate since we had a bus to catch and couldn’t haggle for long. 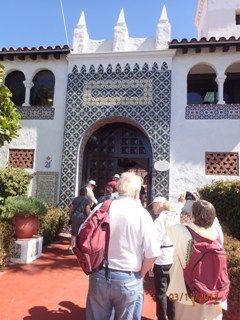 Our next stop was at the Riviera del Pacifico Cultural and Convention Center. This was a huge opulent casino and hotel for the rich and famous in the 1930’s. It was managed by Jack Dempsey, the boxer.  The list of stars who visited included Lucille Ball and Rita Hayworth, Myrna Loy, and Lana Turner. The building has had many ups and down, including becoming a Mexican military base in the 1940’s, a beachfront hotel in the 1950’s and a haven for vandals in the 1960’s. It has been beautifully restored and is now used for community events, weddings, etc. 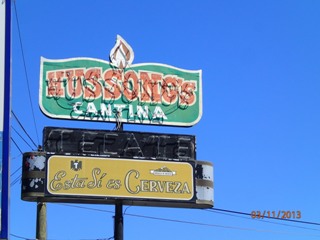 Our next stop was the shopping, restaurant and cruise port district. On the way there, we saw a line of soldiers unfolding the huge 500 pound flag of Mexico that can be seen from almost all parts of Ensenada. Larissa pointed out Hussongs’ Cantina, where the first margarita was made, and several other restaurants, shops and the fish market. After that we were free to explore on our own for a while. Some of us had lunch, some went to the fish market for the last chance to get shrimp at incredibly low prices, some shopped, and some managed to do all
three. 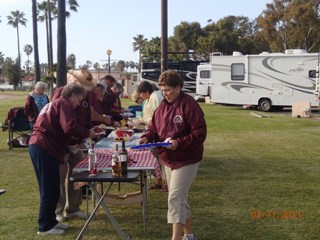 Back at the campground, we ended our day with a delicious potluck dinner. Since we will be departing Mexico in two days, we all needed to use up our chicken, potatoes, eggs, hot dogs, and other assorted items that will not be allowed into the U.S. 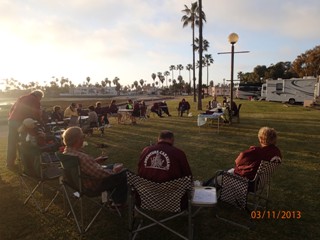 After the potluck, we ended the evening playing our last rounds of Mexican Bingo for this trip. 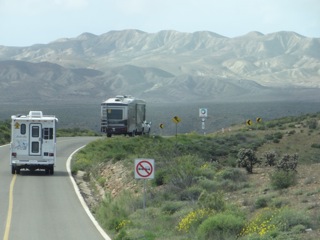 March 10 was a Travel Day from Vicente Guererro to Estero Beach. Several of us enjoyed a buffet Breakfast at the Posada Don Diego Restaurant before leaving on our day’s travels. 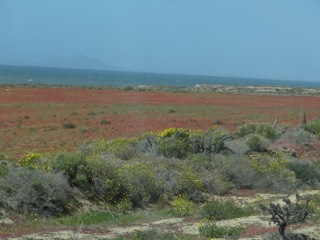 Since it was Sunday, we took our time going over the Mountains in our Rigs. As we drove along, there was a lot to admire:  the red ground cover growing everywhere and the natural beauty of the large patches of yellow, purple and red flowers. 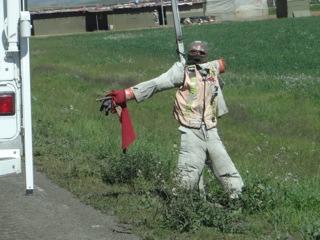 We did stop at a military checkpoint where I got a picture of this military guy warning drivers to slow down/stop at the checkpoint. 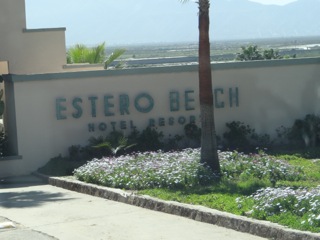 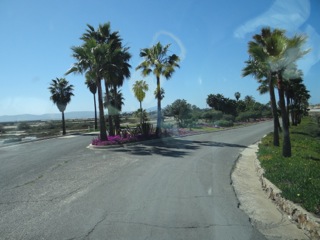 And after our 100 mile drive, we entered the beautiful Estero Beach grounds. 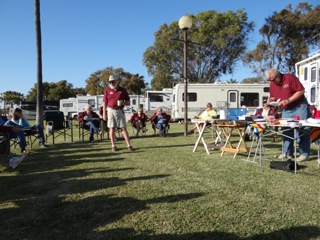 We had a social that night with plenty of snacks. 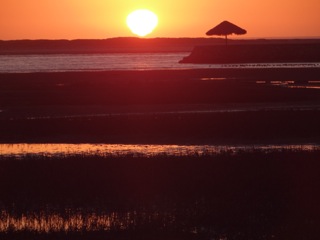 Wagonmaster Ken had told us at the previous day’s briefing that we would see some beautiful sunsets.  And he was true to his word.   Just look at this sunset. 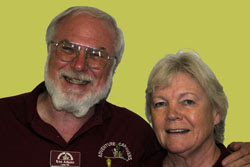 Ken & Carole
We have been Field Staff with Adventure Caravans since 2007. We enjoy traveling and sharing adventures with the great people we meet along the way. We have toured most of North America from Mexico to Alaska to the Canadian Maritimes and Newfoundland. We hope there are many new adventures ahead. 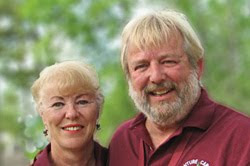 Mark & Mari
In 2007, our love of travel and RVing led us to work for Tracks to Adventure RV Tours. We traveled to Copper Canyon, Baja, Alaska, Canada and the National Parks.
We joined Adventure Caravans after Tracks merged with them. We have now come full circle – with the opportunity to travel the Copper Canyon and Baja again. We're looking forward to getting to know you and seeing this beautiful area of the world again. 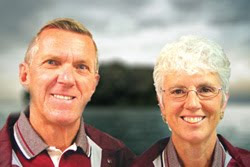 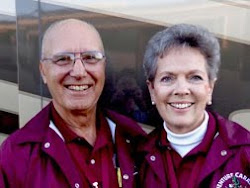 Ray & Jan
We have been field staff with Adventure Caravans since 2012. Our first trip was the Canadian Rockies and Alaska. We just completed the Rose Parade Rally and we are excited about our trip into Mexico. We lived on a sailboat for several years on the west coast of Mexico and we are looking forward to returning in our RV with all of you.